On the first day of our trip in the evening before going to sleep we decided beforehand where to go to have brunch the following morning. That was such a good decision to make.

The second day of the trip started with the delicious brunch in a cute place called ‘In the House’. 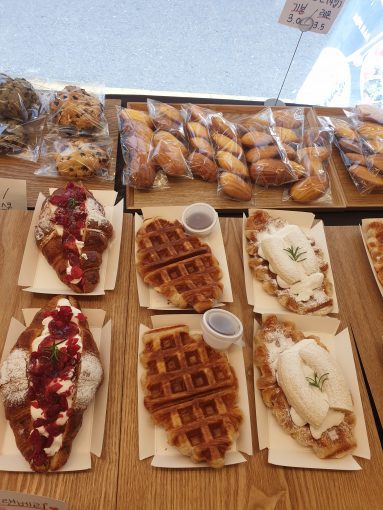 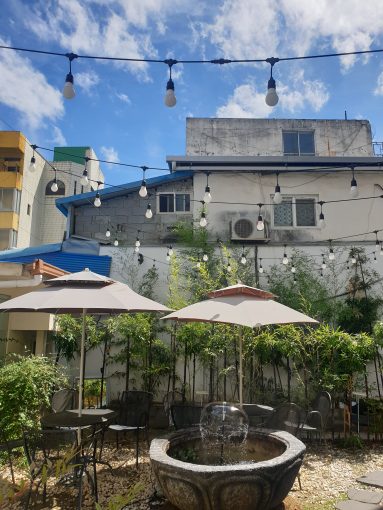 That was one of the loveliest places I have ever been to. The fresh air and delicious brunch have set the mood for the rest of the day. The owners of the shop were so nice and friendly, and we chatted for quite a while about the city and introducing each other where were we from. The cafe has a very nice, majestic design. They have seats both inside and outside. The weather outside the café was so nice and the sky was so blue that we had to take some pictures. But summer being summer we decided to have our brunch inside the cafe under the air-conditioner. ‘In the house’ also have their own bakery, so if you do not want to eat a lot there is always an option for a cup of tea or americano with a freshly baked croissant. Those are what we ordered as well. To start a day with a steaming croissant and strawberry jam – what a life to live. 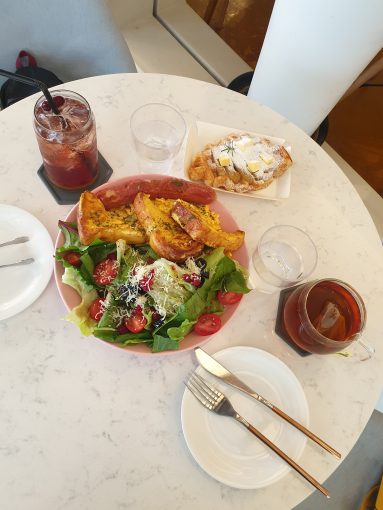 We were living on the shopping street and after having brunch we took a look around. Most of the shops in the area had discounts. Needless to say, that we have spent not only our time there but a significant sum of money as well. No regrets whatsoever.

Following that my friend as a dedicated ARMY really wanted to visit ‘Hopeworld’.

There are also many k-pop idols whose a hometown is Gwangju and BTS’ member J-hope is one of them. There is a K-pop Star Street and all of the celebrities from this city have their photos on the wall. The city’s officials and K-pop art school helped to put the sculpture dedicated to j-hope. There was also the wall of famous people that were born in Gwangju. We spent some time in front of it trying to guess the names of the celebrities and whether we knew them or not. 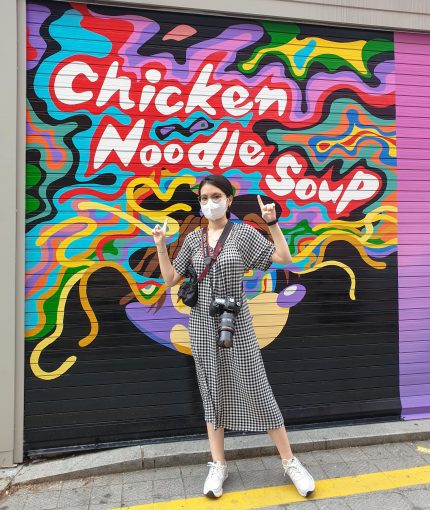 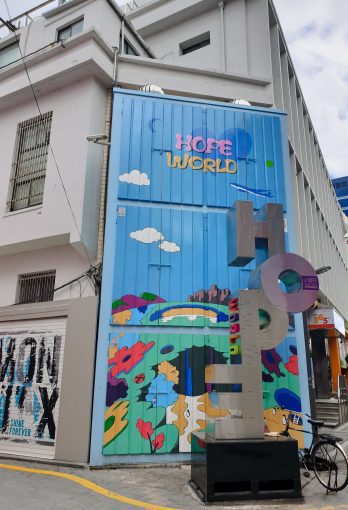 The rest of the day we have spent in Gwangju Family Land.

It is the largest amusement park in the Jeolla provinces and has a vast territory, which is filled with various entertainments fit for couples, children, and families. 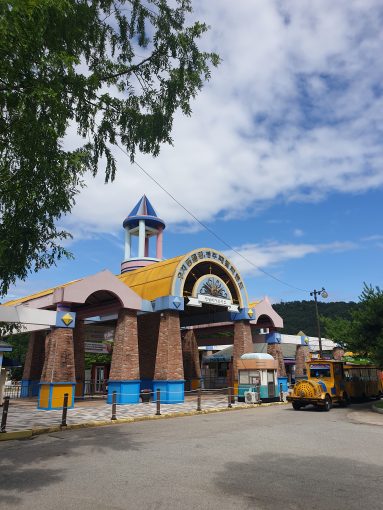 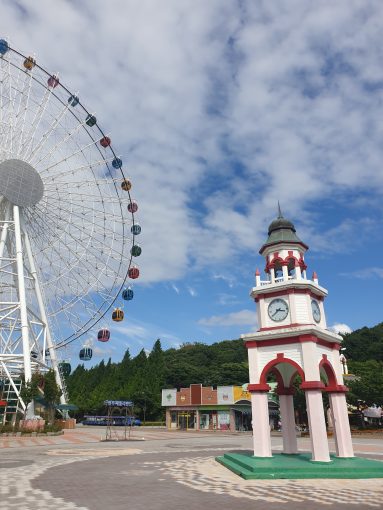 The park is located quite a distance from the center of the city and it will take approximately an hour and a half to get there, but I think it is worth every minute spent on the bus. The territory is so enormous that it will take a while to walk around, but the picturesque view overweights it. We spent our time enjoying the fresh air and even took a ride on a Ferris wheel. The park is also connected to a zoo. And therefore, we decided to buy tickets there as well. All the animals living there were definitely struggling from the heat and were hiding inside their homes, but we managed to see some of the animals. Personally, I have spent some time in front of the birds. I have two of my own and it was fascinating to look at those in front of me and find similarities.

All the walking took our energy and we had a rest by eating the most delicious kimbap and ramen, while breathing in the freshest air and have a nice view. The owner of the shop was an old lady. She was so nice and we had a good chat together. 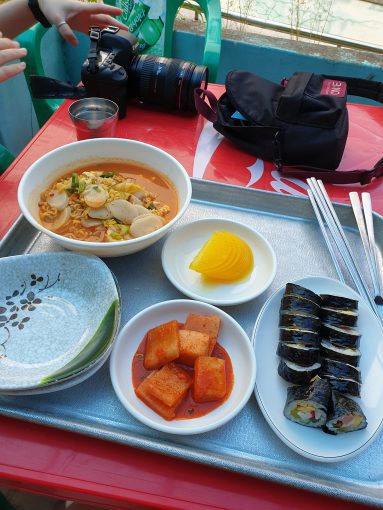 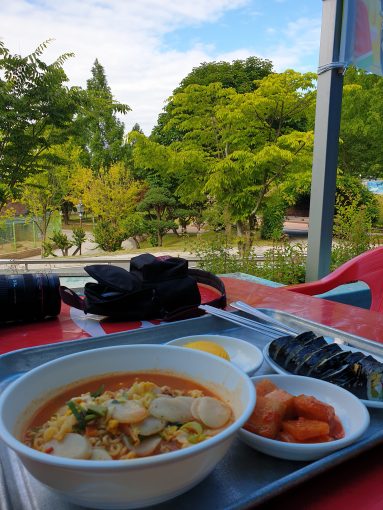 She recommended to us to try an ice cream that she sells at her shop. That is why as a desert for the first time in our life we have tried ice cream in the shape of small balls. The cutest ice cream I have ever seen. 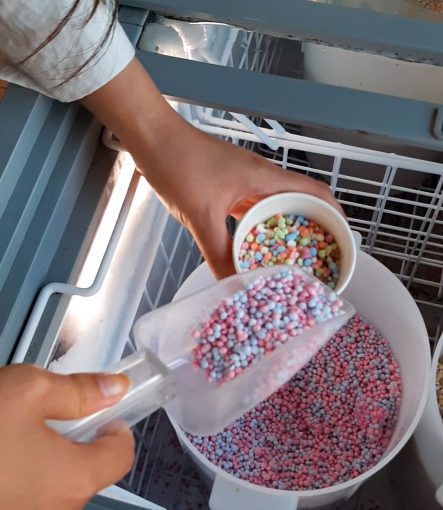 Following morning before returning to Seoul we had a small breakfast in ‘Paik’s Coffee’ with the smoothest milk ice tea and the biggest madeleine that helped keep away our hunger all the way home. ‘Paik’s Coffee’ is very famous around South Korea, but it was the first time in my life that I have seen a big shop like this one. The milk ice tea and the biggest madeleine were a nice ending to our trip to Gwangju. 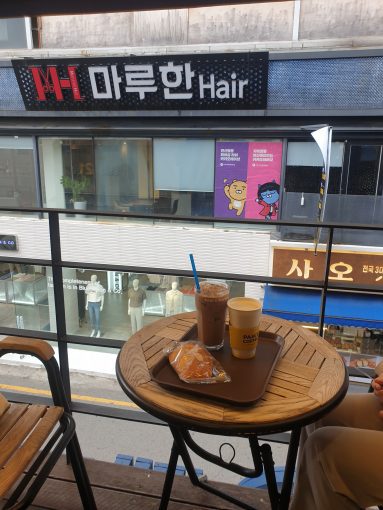 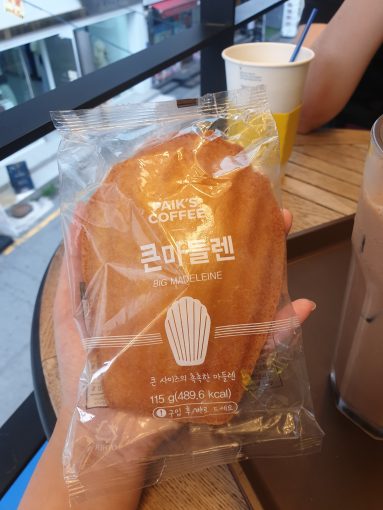 Returning to busy Seoul, I missed the atmosphere of relaxation of that city. But the memories that we have made there are precious and I will be really happy to visit Gwangju again sometime in the future and spent more time finding out all the secret places and nicest cafes.

South Korea has all four seasons: winter, summer, autumn, and spring. The whole country looks differently each season and with